An aerial view of historic B-Building 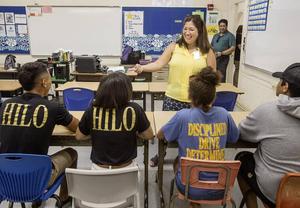 On Monday, as Hilo High freshmen began their own high school careers, new Hilo-Waiakea Complex Area Superintendent Esther Kanehailua found herself back at the site of her own.
By STEPHANIE SALMONS Hawaii Tribune-Herald | Tuesday, August 6, 2019, 12:05 a.m.

A 1986 graduate of Hilo High School, Kanehailua did her student teaching there in 1990 and began her teaching career at the school in 1991. A little more than a month into her new role, she returned Monday, the first day of school for freshmen.

The students gathered first in the pavilion outside before making their way to the auditorium for orientation, where they were led in spirited cheers and encouraged by fellow students.

Sitting in the pavilion, largely empty save for a few passing people, Kanehailua said she feels for the students.

“I always think about that walking around here, what it was like to be in your first year,” she said. “But what’s so awesome is how much support they get and how they transition the kids so that they feel welcome, because as I’m walking in, I hear over the PA the vice principal welcoming all of them … and getting them excited. And then I see that banner — it says ‘Welcome home, Vikings.’”

As she talked, Kanehailua warmly greeted, and was greeted by, familiar faces as they walked by.

“… I started my carer here at Hilo High School, so I have such fond memories of being here and being a new teacher, and being a student,” she said.

With a nearly three-decade career in education, Kanehailua was named complex area superintendent in June and began in the role July 1.

As complex area superintendent, Kanehailua said she has a lot of appreciation for “what I see schools do for students.”

“You know about it when you work in the complex, but now, from my standpoint, I get to talk one-on-one with the principals and experience what they do to support kids, and I think it’s pretty phenomenal.”

In her new role, Kanehailua said creating conditions for students, families, staff and administration to thrive is a priority.

“And really, it is how do we make sure that people are supported in the way they need to be supported so they can give (that) support to kids,” she said. “And I feel like a lot of that, too, schools do so much of that work already, and some of that for us is just making sure that we provide the networks and connections so they can share the work that they do.”

Last fall, she was named deputy complex area superintendent for the Hilo-Waiakea and Ka‘u-Keaau-Pahoa complex areas.

“I have a newfound appreciation for hard-to-fill schools,” Kanehailua said when discussing her role as deputy. “… It was just a privilege to work with a lot of principals and see what they do for their staff day in and day out to support them.”

Collaborations between the complex areas will continue, she said.

“(We) work for the same department, we have the same goals, so whenever possible, it makes sense for us to have a lot of that crossover work.”

Kanehailua said her hope for the new school year is to continue her work with and to get to know the complex area’s principals better.

“I know many of them, because I worked with them as colleagues, but it’s so very different when you’re in a new role,” she said. “It’s building that relationship and that trust with each of them is really my priority, to make sure that we can support each other going forward.”

There are hurdles to overcome, though.

Kanehailua said one challenge is to support English language learners so they feel honored and valued as a part of the community.

“… If those students and their families feel accepted and honored, they’re going to be great partners with us through their child’s education, where they feel valued and they know they bring something to the table.”

The same goes for ensuring equity for any “high-needs” students.

Equity, she said, is “always going to be the challenge, and that’s what we should be striving for every single day for our kids.”

For her, Kanehailua said leadership is not a title, it’s an action.

“It’s what you do and say, not the title you have, and I think that was really what has always spoke volumes to me from when I went into administration,” she said. “It was about how are you in service to others, so that they can be the best they can be every day.

“… If that’s how I continually practice to do that, to be in service to others … then that’s how you can help people grow in their roles. But it really is looking at it from the area of just servant leadership.”

Waiakea High School Principal Kelcy Koga said Kanehailua has been “especially supportive of our efforts at Waiakea. I look forward to supporting and following through on her vision of across-the-complex student achievement.”